What is DWDM? Its Uses, Benefits, Components

DWDM got its name from using tighter wavelength spacing (dense) to fit more channels, with each channel being only about 0.8nm wide. This is opposed to its WDM sibling, CWDM, where it uses a wider range of frequencies, with each channel spread farther apart. With a CWDM channel being 20nm wide, the high number of channels available to DWDM means it can cram much more data into the cable.

How does DWDM Work?

To explain how DWDM works, we first need to explain how the WDM works. Wavelength-division multiplexing, or WDM, uses a multiplexer to join several different data streams and convert them into wavelengths of light before transmitting it over the fiber optic cable, which is then de-multiplexed at its receiving end and split back into its respective streams of data.

Being a dense form of WDM, DWDM uses the same multiplexer to de-multiplexer transmission method, except that it can fit much more channels. To put that into perspective, if each channel carries 100Gbps of data, then at 160 channels per fiber cable, DWDM can essentially have a capacity of 1.6Tbps of data per fiber cable.

What are the Benefits of DWDM?

The major benefit of using DWDM technology is that it can transmit a large amount of data over a very long distance, which makes it very suitable for long-haul transmission. It can also be used with existing fiber optic cables with the means of increasing their data capacity as optical technology improves.

DWDM technology is useful when data needs to be sent across several states or even across oceans. Where it is much cheaper to install a DWDM system rather than laying down hundreds or thousands of kilometers of new fiber.

Another benefit DWDM technology has for data transmission is that DWDM is protocol and bitrate independent, because as data flows through each wavelength, the channels do not interfere with one another. This means DWDM can carry different types of traffic such as voice, video, and text over a single fiber optic cable, which is very beneficial to service providers who offer multiple services to their customers. This non-interference also helps to maintain the integrity of data and enable the separation of users and other types of partitioning applications.

Since DWDM is a technology, it can technically be used in any part of the transport network. It mainly comes down to whether it’s worth it to use DWDM for that purpose, since a traditional DWDM system can be more expensive than CWDM. But, with the benefits of DWDM being high bandwidth, long distance, security and protocol independent, it is most often utilized by telecommunications and cable companies as part of their carrier transport network.

DWDM is also suitable for densely populated data centers such as co-location data center providers or hyperscale cloud service providers since it has the capability to combine several services together with independent tenants. Also, as data centers become more geo-distributed, DWDM is often used as the data center interconnect.

As mentioned previously, DWDM is often used by telecommunications, cable and data centers as part of their optical transport network. In the examples below, we highlight where DWDM can be applied to a carrier transport network and a data center network.

DWDM in the metro aggregation network is used to combine data from several cities. As service providers bring more computing capabilities closer to their customers, DWDM is also flexible enough to meet their needs for higher bandwidth aggregation as they begin to converge more data into a single node to compute. The core backbone often deals with the high-speed switching of large amounts of data between their major central offices, which can span across several regions, states or even countries, which is also ideal for using DWDM.

Data centers are an ever more important aspect of internet services and the data center interconnect (DCI) is a critical component to ensure the reliability and availability of data center services. DWDM can be a good addition to the DCI network as it typically needs to back up massive amounts of data to different data center locations. 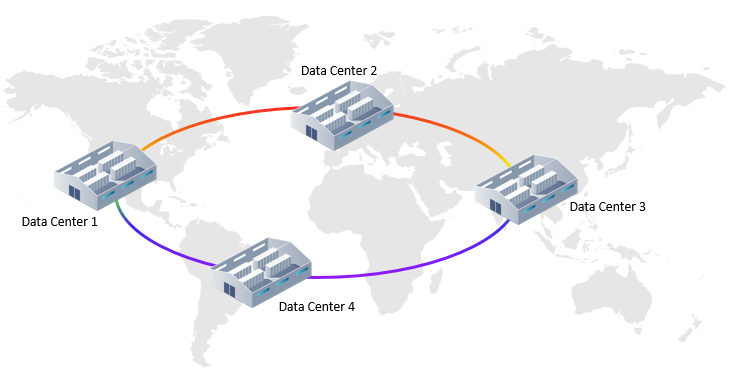 However, with the challenges faced by data centers operators deploying data center interconnects, a more open, flexible and interoperable DCI network may be needed.

What are the DWDM Components?

The components of a traditional DWDM system consists of the transponder, multiplexer/de-multiplexer, optical add/drop multiplexers, and optical amplifiers.

Below is a high level overview of the process in which data is transmitted using DWDM and what each component’s function is within the system:
1. The data stream comes in via the router and is input into the transponder.
2. The transponder maps the signal to a DWDM wavelength and sends it to the multiplexer (Mux) to consolidate the optical signal.
3. As the signal leaves the multiplexer, optical amplifiers boost the signal to allow the signal to travel over longer distances.
4. Along the way, optical add/drop multiplexers (OADM) can add and remove bitstreams of a specific wavelength. Also, additional amplifiers can be used to further boost the signal’s distance.
5. The signal the arrives and gets de-multiplexed (DeMux) into individual DWDM wavelengths, which are then passed through the transponder to be converted into the corresponding signals to be routed to its final destination.

A disaggregated DWDM uses an architecture that separates the transponder unit from the optical line system. This allows for newer technologies, such as 100G/400G DWDM to be implemented without having to replace every integrated DWDM component.

As service providers implement new 5G services, they are faced with the immediate need to migrate to higher speeds and better performing transponder technologies. Disaggregating the DWDM system allows for an ecosystem to support the development of new DWDM solutions. One of these efforts was led by Telecom Infra Project with the establishment of their Open Optical & Packet Transport project group to accelerate such innovation.

UfiSpace combines use of transceivers supporting 400ZR and OpenZR+ to build disaggregated DWDM systems without the need of extra transponder equipment. Our open core routers, S9710-76D and S9700-23D, have 400G QSFP-DD ports with support for ZR/OpenZR+ transceivers to take on the role of a DWDM transponder in addition to its routing functions.

For more information, or to get samples, please contact our sales team.

In this Article: 5G Aggregation Technology