Everything You Need to Know About DCSG

The disaggregated cell site gateway (DCSG) is a solution many service providers are deploying at their cell sites to perform multi-function backhauling. The DCSG combines the benefits from a versatile white box platform with an open networking ecosystem of developers to create its service features.

What is a Cell Site Gateway?

A cell site gateway, or cell site router, is a L2/L3 device that aggregates mobile data traffic from the cellular access network (cell sites) and transports it back to the service provider’s core network. This makes the cell site router a component of the telecommunication backhaul network. 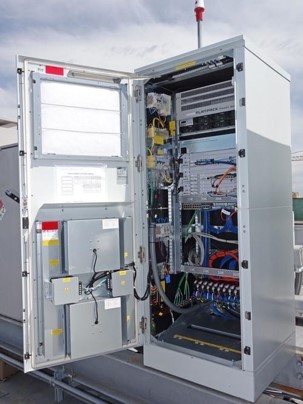 Cell site equipment inside a base station cabinet (source)

The DCSG, or Disaggregated Cell Site Gateway, is an open network cell site router that has decoupled its software features from its hardware components. The cell site router is built as a white box platform using merchant silicon, with the capability to integrate network operating systems from different solution providers using standardized APIs.

The DCSG opens the door for any developer to build their solution on top of the platform and enter the backhaul market. This spurs rapid innovation and introduces more vendors who can potentially provide new and improved solutions for service providers.

These were the problems faced by service providers when they were deploying cell site routers in their mobile networks during 2G, 3G and 4G deployments.

Here are some reasons why service providers are starting with DCSG:
• Traffic pattern is simpler than other parts of network
• They can upgrade piecemeal and minimize disruption to other parts of carrier’s network
• Easy to start with minimal investment
• Enable access network to meet the stringent timing requirement of 5G RAN
• Prepare backhaul capacity for the surge of future traffic volumes

Service providers who are unfamiliar with disaggregated and open networking solutions can utilize the DCSG as a way to better understand the implementation and maintenance processes.

The earliest known concept of a disaggregated cell site gateway router was introduced by AT&T in 2017 when they began conducting trials for introducing a telecom white box into their network. At the time they were collaborating with Intel and Broadcom and working with Linux based operating systems. AT&T was developing it as a white box cell site gateway router (CSGR). Term DCSG was a term later coined by the Telcom Infra Project (TIP) when they introduced the disaggregated cell site gateway as a sub-project under their OOPT Group.

In February 2018, major telecoms Vodafone, Telefonica, Orange, TIM and others began collaborating via the Telecom Infra Project to develop specifications for their version of a Disaggregated Cell Site Gateway. By October 2018, TIP released their DCSG specifications while AT&T contributed their white box cell site gateway specifications to the Open Compute Project (OCP).

The earliest deployments of DCSGs into carrier networks were by AT&T and Telefonica in 2019. As of 2021, DCSGs are being deployed into several service provider networks across North America, South America, Europe, Middle East and South East Asia.

The disaggregated cell site gateway is built with a white box platform, so it goes without saying that the ASIC for the DCSG is a merchant silicon. Merchant silicon allows for the commercial availability of the ASIC to be used for development, which in turn lowers the purchasing cost due to economies of scale. The most widely used silicon for DCSGs are from Broadcom’s StrataDNX® Series, in particular the Qumran-AX, Qumran-UX, Qumran2a, and Qumran2u.

Comparison of Broadcom Silicon for DCSG

The DCSG port interfaces should include a good mix of compatibility for both legacy (2G/3G/4G) as well as 5G base band units. For port speeds that support legacy technologies, the DCSG may have 100M, 1G, or 10G ports with a variety of form factors such as RJ45, SFP and SFP+. For supporting 5G it can provide up to 25G, 40G, 100G, or 400G with form factors of SFP28, QSFP28, and QSFP-DD. Newer technologies and functions are also being introduced to the DCSG such as Flexible Ethernet (FlexE), MACSec, and even OpenZR+ to enable IP and optical network convergence for the transport network.

A reliable DCSG should have the capacity to support features for timing synchronization such as compliance to ITU-T Synchronous Ethernet (SyncE) and IEEE 1588v2. To provide more flexibility for the service provider, the DCSG should have the necessary timing interfaces such as GNSS, 1PPS, 10MHz, TOD, and BITS.

The DCSG should be compact in size since the most likely place it will be installed in is an outdoor cabinet or in a room at the base station, which will have very limited space. The physical design of the DCSG should further accommodate its accessibility from only one side of the outdoor cabinet. Therefore, it is important that all the features, functions and port interfaces of the DCSG can be accessed from the front panel.

Cell sites are meant to extend mobile coverage to wherever there are people, which means cell sites will be located in environments ranging from the freezing winters in Alaska to the hot and humid summers of Florida. DCSGs should be able to withstand to these types of climates.

In addition to high and low temperatures, DCSGs should maintain functionality even when faced with temperature shocks, high humidity and earthquakes. In the US, the NEBS (Network Equipment Building System) certification is often used as a guideline for whether or not the DCSG can withstand harsher environments. In some cases, it is taken a step further with major service providers, such as AT&T and Verizon, having their own check lists based on the NEBS.

There will be situations where cell sites are often built in areas that may not be easy to get to such as out in the country side, up in the mountains, or even in swamps. This makes maintenance a heavy burden on the service provider. In some cases, boat trips or helicopter rides are needed to reach secluded cell sites, which not only is costly, but dangerous as well. A DCSG should be constructed in a way to extend lifetime, but to further reduce these types of burdens for the service provider is with the use of fanless DCSGs.

Fanless DCSGs minimizes the amount of moving parts within the disaggregated cell site gateways to further reduce the likelihood of mechanical failures. Instead of relying on mechanical fans, which draws more power and is susceptible to wear and tear, the DCSG utilizes heatsinks to draw the heat from the components and dissipates heat using natural airflow.

One of the major benefits of DCSGs for service providers is the choice to choose the software features they want running on top of the cell site gateway. Since the inception of DCSG in 2018, the software vendor ecosystem has grown exponentially to encompass world renowned solution providers like IP Infusion, Capgemini Engineering, and ADVA.

New software features are also constantly being introduced, fueled by the innovative nature of an open networking ecosystem. It is very much in line with what service providers had hoped when they first begin disaggregating the cell site gateway.

Here are some of the software features for the DCSG according to the Telecom Infra Project:
• OSPFv2 (RFC 2328)
• OSPFv3 for scenarios where IPv6 is used (RFC 5340)
• eBGP for CE to PE communication
• OSPFv2/v3 for CE to PE communication
• IS-IS for IPv4
• IS-IS for IPv4 and IPv6 compatible mapping
• IS-IS ready for supporting IPv6 and IPv4/IPv6 dual stack
• MACSec support
• Support off EAP-TLS IEEE 802.1x where MACsec is not implemented
• MD5 support for mutual authentication with other NEs/DCSGs

The DCSG would include Netconf (RFC 7803) and PCEP interfaces for compatibility with software defined networking (SDN) controllers. In addition, for advanced monitoring and telemetry features, the DCSG would support gRPC Network Management Interface (gNMI), gPB (Google Protocol Buffers) proto3 for encoding, and data exported (modelling) based on YANG models.

As seen with AT&T and Asia Pacific Telecom, the main use case for DCSG would be to perform 2G/3G/4G/5G backhaul for the mobile transport IP/MPLS network.

DCSG use cases in the telecom transport network

The open and disaggregated feature means there will always be new vendors offering their version of the DCSG, but of course deployment experience and capabilities goes a long way. For those who are unsure where to find DCSG vendors, they can visit the marketplaces for Telecom Infra Project (TIP) and Open Compute Project (OCP). These are the two longest standing and largest ecosystems for disaggregated cell site gateways.

What are the DCSG Options?

Not every cell site is going to be the same. There will be different requirements for DCSGs depending on the cabinet spacing, power availability, climate, traffic and even services deployed. DCSGs options have to be versatile enough to fit the specific needs of the service provider. The chart below shows the different DCSG options available for different speeds, capacities and port densities.

UfiSpace offers field proven DCSGs in an variety of speed, capacity and port density options. If you would like to get samples of our DCSGs, please contact our sales team.