Fixed-Mobile Convergence (FMC) is a term to describe the architectural transition of unified network core for operators to seamlessly deliver both broadband and 5G services to their customers. The Open Broadband Network Gateway (Open BNG) is considered as one of the potential network solutions available to help service providers achieve both structural and functional convergence while avoiding enormous capital investment and disrupting existing services.

What is Fixed-Mobile Convergence (FMC)?

Fixed-Mobile Convergence (FMC) is referred to a system that can have multi types of wireline and wireless access connections being managed with a unified 5G core.

Fixed-mobile convergence is not a new terminology in the telecom industry. It emerged from a desire to use fixed and mobile assets to provide multi-access connectivity. However, in the 5G era, the definition has expanded beyond multi-access connectivity and into the enablement of deploying seamless services managed with a unified 5G core network. It has become an area receiving lots of attention due the benefits it creates for both mobile and fixed broadband operators.

Why would service providers want to converge fixed and mobile networks? The short answer is to meet with the consumer demand. We are now far beyond from the “you get what we give you” consumer mindset. Customers now want a smooth, personal experience, which requires high speed service delivery, low latencies, and unified customer services. 5G technology has the capability to meet these requirements and it introduces new ways for service providers connect their customers to their network. Service providers can extend the enhancements brought forth by 5G into their wireline network by converging it with the 5G core.

Fixed-mobile convergence is a solution for service providers to manage their wireline networks more efficiently. It allows their customers to be served by a common core network, streamlining user experience while promoting new services.

How does 5G Fixed-Mobile Convergence work?

Work to bring fixed-mobile convergence to reality is being done in collaboration between the Broadband Forum (BBF) and the 3GPP, as per their technical report, TR-470. To describe their efforts simply, the majority of the work for fixed mobile convergence will be placed on integrating new and legacy wireline access nodes with the virtualized 5G core. 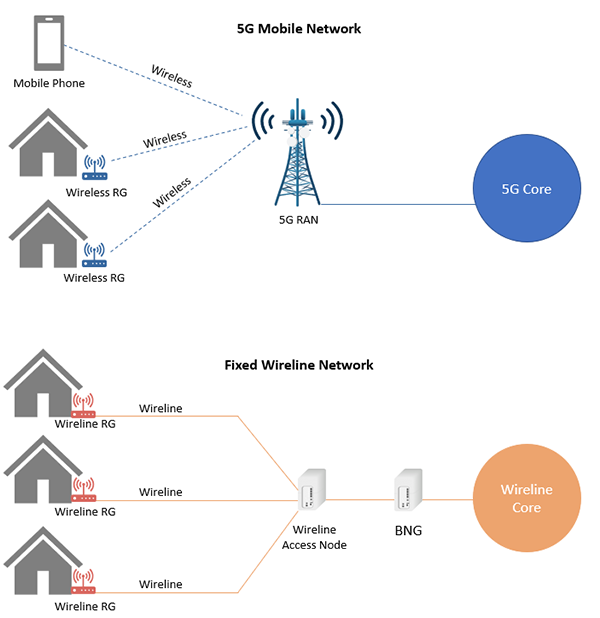 Additionally, as defined by the BBF, the 5G residential gateways (5G-RG) will come in several variations with capabilities to support 5G wireless access or fixed wireline access or both within the same gateway. The AGF will also support the 5G-RGs with wireline capabilities to be introduced to the access network.

Fixed-mobile convergence with AGF and FMIF

No matter the approach, service providers will need to host the access gateway and fixed mobile interworking functions. An open broadband network gateway can bring more flexibility to service providers who are planning to implement the AGF and FMIF as part of their transition to a fixed-converged network.

An Open BNG, a broadband network gateway that is disaggregated using open networking standards, will help service providers transition their network architecture into a fixed-mobile converged network. On top of the benefits of being disaggregated, the “Open” in Open BNG also means that the hardware can be integrated with open software developers to run a wide range of features that may be useful for fixed-mobile convergence.

The Open BNG concept was put forth by the Telecom Infra Project’s Fixed Broadband project group with a technical document resulting from the collaboration of Telefonica, Deutsche Telekom, BT, Vodafone and others. Their technical document defines the requirements for an open and disaggregated white box platform with BNG features and the capabilities to provide service providers with enough flexibility to implement fixed-mobile convergence.

With the disaggregated architecture of the Open BNG certain functions such as the AGF and FMIF can be developed and implemented (in part or fully) onto the same box once development has finished. In the meantime, while we are waiting for these functions to finish development, the Open BNG can still perform multiple functions within both the fixed and mobile networks. 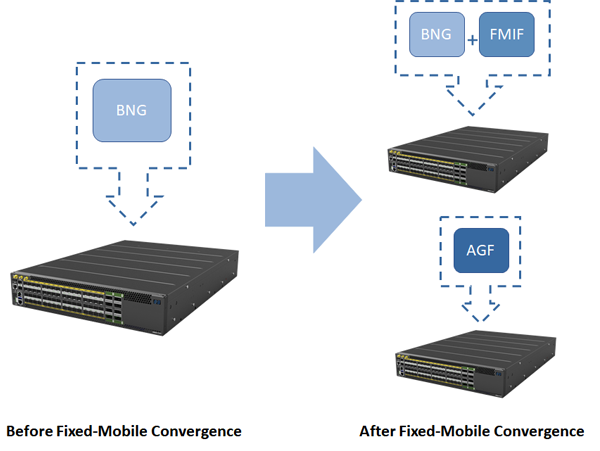 Functions on Open BNG for FMC

Aside from futureproofing the network for the imminent fixed-mobile convergence, the Open BNG can also provide several other benefits to the service provider such as optimized service delivery, scalability, flexibility, more control over TCO and has an open architecture giving the service provider access to a large solution ecosystem.

5G technology itself, compared to previous technology generations, is operating in a more diverse environment characterized by multi-layer networks, multiple types of access, with software defined networks and virtualized network functions. To achieve 5G FMC, an Open Broadband Network Gateway solution will provide the service provider with the tools for their transition from a separated mobile and fixed network to a converged one.