The DWDM is an essential technology used in coherent optical networks to transport data over long distances from tens to hundreds of kilometers. It is commonly used for such applications as data center interconnect, metro network and other long haul transmissions.

OpenZR+ is the latest addition to DWDM implementation that spawned from the need to transport data faster and over longer distances in order for service providers to better control their infrastructure capex and opex. In this article we explore the evolution and benefits of DWDM technology and how OpenZR+ can help service providers build efficient, converged IP/optical networks.

Before we dive into the technology, let’s start with some basics. DWDM (dense wavelength-division multiplexing) is an optical fiber technology that combines (multiplexes) several carrier signals onto a single optical fiber using different wavelengths of light.

DWDM networks have come a long way and is still evolving to meet the changing needs of today’s service providers. What started out as an oversized, proprietary modules have evolved to become a compact, open standard transceiver supporting speeds of 400G (10 times what it was less than 10 years ago) with support for 800G right around the corner.

A major benefit of using DWDM technology for long haul optical transport is the amount of data it can carry.

Simply speaking, when we want to transfer data, we modulate the data and send it over the physical medium. To put it simpler, we are sending a 1 or 0 through a cable. If we want to increase the data rate (or speed in which we send data), we can either raise the transmission rate (sending 1 and 0 faster) or increase data amount per signal (sending multiple 1 and 0 at the same time).

Modulation is the process to convert the data into waveforms before it can be transmitted over a physical medium. The combination of different amplitudes and phases of waveforms can represent different symbols. The higher order of modulation can carry more data but also more sensitive to noise which means shorter transfer reach.

Sending a lot of data is great, but if the sensitivity of the wavelength makes it more susceptible to degredation, the transmission distance will be very short and unsuitable for long haul optical transport applications. When DWDM is combined with Forward Error Correction technology, it has the capability to transport large amounts of data over very long distances.

When light travel through the optics, the waveform will be degraded or interfered and the receiver may not be able to interpret the data properly. In our previous simple example, the receiver will be unable to decide whether it received a 1 or 0.

FEC (Forward Error Correction) is a method to fix the data error caused by noise during data transmission. It is done by introducing extra check bits to help the receiver validate the integrity of data so that it has a chance to fix errors without resending data packets. This makes the signal more resilient to signal degradation in long distance transmissions.

There are two methods of FEC, Hard-Decision FEC (HD-FEC) and Soft-Decision FEC (SD-FEC). HD-FEC uses a fixed threshold to measure the wavelength and decide on whether the data is a 1 or 0. For example, if the signal is above the threshold it is a 1 and below the threshold it is considered a 0. This type of method may have ambiguities when the signal is distorted or the variation away from the threshold is very small. To give the receiver a better understanding of how confident they should be about the data’s integrity, SD-FEC is used to offer extra information to provide confidence levels regarding the signal value and leverage more advance algorithm to calculate the result based on the probabilities that a 1 or 0 has occurred. It provides finer granular indication of the signal and results a 20% to 40% improvement for achievable distance.

The Rise of Open ROADM and 400ZR

Nowadays, all the applications such as video streaming, conference call, online gaming and cloud services demand larger amounts of data, surpassing the 100G data rate. DWDM network is responsible for carrying high volume of data between data centers and across continents.

For a very long time, optical transport solutions were proprietary due to the complexity of the signal processing. There were a few tries from the industry to define a standard, but the outstanding performance provided by proprietary solutions kept users from adopting a standardized solution.

OIF (Optical Internetworking Forum) initiated the 400ZR in 2016 to define a 400G coherent optical interface for router-to-router interconnects supporting distances up to 120Km. Another standard body, Open ROADM, was also defining the specification for 100G to 400G optical interfaces to address the requirements of high speed ROADM (Reconfigurable Optical Add-Drop Multiplexer) networks with open standards. It supported multiple data rates from 100G to 400G and reached up to 500Km.

Both 400ZR and Open ROADM had their strengths and limitations, but the industry was looking something with more flexibility, which could be a unified solution for both data center interconnect and the optical transport network. OpenZR+ combines specifications from 400ZR and Open ROADM to address a wider range of application scenarios with higher performance, longer reach, and supporting multiple rates of ethernet transport.

oFEC is a type of SD-FEC that can provide better recovery rates to ensure data correctness over long distance transmissions up to 1000s of kilometers. It doesn’t come without its drawbacks since oFEC needs more complicated hardware designs, has longer latency and consumes more power.

In addition to more transmission rates, OpenZR+ also enables interoperable and flexible coherent DWDM optical solutions in a small form factor pluggable. It can simplify the network architecture and reduce the costs of long-haul optical transport networks by allowing OpenZR+ compliant switches to utilize DWDM via an OpenZR+ pluggable transceiver. 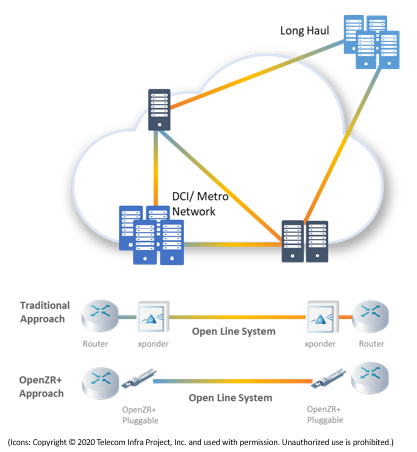 UfiSpace offers OpenZR+ compliant switches to simplify DWDM optical transport networks. The S9710-76DC is a high density 400G switch suitable for next generation optical network switching with over 14.4Tbps of capacity, which can be increased by creating a distributed disaggregated chassis cluster to increase capacity up to 691Tbps per a single cluster.

For smaller capacity switching, the S9510-28DC offers multiple 25G/100G/400G ports to accommodate long haul from within the access network.

To get more information or samples of our OpenZR+ enabled solutions, please contact our sales team.

In this Article: Aggregation DCSG Technology